The Honda Super Cub debuted in 1958, ten years after the establishment of Honda Motor Co. Ltd. The original 1952 Honda Cub F had been a clip-on bicycle engine. Honda kept the name but added the prefix ‘Super’ for the all-new lightweight machine.[7] The Super Cub sold poorly at first, owing mainly to the recession in Japan, and then three months after the 1958 launch when customer complaints began rolling in about slipping clutches.[8] Honda salesmen and factory workers gave up holidays to repair the affected Super Cubs, visiting each customer in person.[8] When it was imported to the US, the name was changed to Honda 50, and later Honda Passport C70, and C90, because the Piper Super Cub airplane trademark had precedence.[31] Similarly, in Britain they were only badged “Honda 50”, “Honda 90” etc. as the Triumph Tiger Cub preceded.

The Society of Automotive Engineers of Japan (in Japanese), including the 1958 Honda Super Cub C100 as one of their 240 Landmarks of Japanese Automotive Technology.[1] 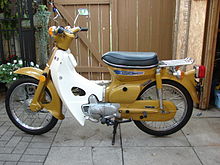 Because some countries offered age restriction and tax advantages for mopeds, Honda also introduced the C310S, a moped version of the Super Cub complete with bicycle pedals. The C310S fuel tank was relocated from beneath the seat to a more conventional placement at the top of the leg shield. This iteration is now somewhat rare, having been marketed primarily in the Benelux countries.[citation needed]

In 1982, for most markets, Honda fitted a new capacitor discharge ignition (CDI) system to replace the earlier contact points ignition, thereby helping to meet emission standards in markets such as the US. At the same time the electrical system was changed from 6 volt to 12 volts .[citation needed]

In 1984, Honda released restyled versions of the Cubs on some markets, with square lamps and plastic-covered handlebars and rear mudguard. On the domestic Japanese market the square style was optional, but in some places such as the UK they replaced imports of the traditionally styled round lamp Cub.[citation needed]

In 1986, a larger 100 cc HA05E engine model was introduced especially for Asian markets. The newer 100 cc model was developed exclusively for Southeast Asian market, especially in Thailand, Malaysia and Vietnam, where underbones were very popular, with new features such as a telescopic front suspension to replace the older leading link suspension, and a four-speed transmission to replace the older three-speed transmission used in older Cub variants. The 100 cc model was initially known as the Honda Dream in Thailand and Honda EX5 in Malaysia, before being standardized as the Honda EX5 Dream in 2003. In addition, Honda Japan began importing the made-in-Thailand Dream as the Super Cub C100EX in 1988.[40] The Japanese C100EX was later being facelifted in 1993, while the Southeast Asian EX5 Dream retains the 1986 design until the present day, with only minor cosmetic changes.[41] In 2011, the carbureted EX5 Dream was phased out in Thailand and being replaced with the fuel-injected Honda Dream 110i, with the powertrain being derived from the fuel-injected Honda Wave 110i.[42]

In the late 1990s, Honda introduced their newer NF series motorcycles, known as Honda Wave series, called the Honda Innova in some markets, which use steel tube frames, front disc brake, and plastic cover sets in various displacement options: 100 cc, 110 cc and 125 cc. Though not Cubs, these bikes sold consistently well particularly in European countries, where the production of Honda Cub models had been previously discontinued. However, the production of Honda Cubs in Asia, Africa, and South America still continues today, even though the newer Honda Wave Series and other designs have been introduced alongside the Cub.[citation needed]

Honda made a 2018 model year special edition to commemorate the 60th anniversary of Super Cub production, with a celebration at the Ōzu, Kumamoto factory where the 100 millionth Super Cub was produced in October 2017 .[43][44][45]