In 1960 the CZ100 arrived,[7]:39 using the same engine in a much smaller frame with only 5″ wheels. First of the Honda Z series, the CZ100 was meant only as a short-distance novelty or paddock bike, but instead found popularity in the monkey bike niche.[7]:39–40 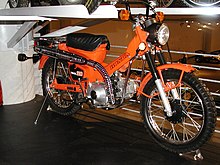 An on- and off-road version of the Super Cub, what today would be classed as a dual-sport motorcycle but called a trail bike at the time, the CA100T Trail 50, came out in 1961.[14]:46 Jack McCormack, the first national sales manager of American Honda Motor Company, said the Trail 50, and even more so the later Honda CB77, was the result of Honda’s willingness to listen to and respond customer demand.[14]:34–60 “When you talk about Japanese manufacturers, their strength (besides the quality of their equipment) was that they listened to the marketplace. People always suggest that it was about Japanese management, but, to be frank, I was never impressed with Japanese management. They did what no other motorcycle maker did—they listened.”[14]:47

In 1960, McCormack noticed that one Honda dealer in Boise, Idaho was selling more Honda 50s than the combined total of all six dealers in Los Angeles. He found out that the Idaho dealer, Herb Uhl,† was selling the CA100s as a trail bike by adding knobby tires for off-road traction and a “cheater sprocket,”[14]:34–60 that is, increasing the final drive ratio by using a larger rear sprocket with more teeth, which increased the effective torque of the rear wheel, trading off lower top speed as a result. Uhl said the advantages of lightweight and the automatic clutch allowed unskilled riders to enjoy off-road riding, in comparison to traditional big trail bikes that could be difficult to handle.[14]:34–60 McCormack shipped a version of Uhl’s customized CA100 to Japan and requested Honda put it into production, and by March 1961 the Trail 50 was available to US dealers.[14]:34–60 Cycle World praised the simple pleasure of trail riding on the new bike, and it was a US sales success.[14]:34–60