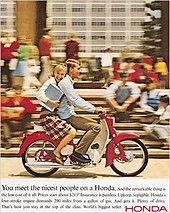 “You meet the nicest people on a Honda” print advertisement, from poster or magazine page

In June 1963 in US media,[22] Honda began the 12-year-long advertising campaign “You meet the nicest people on a Honda”, created by Grey Advertising.[23] Grey had bought the idea from a UCLA undergraduate student, who had created the concept for a class assignment.[24] The event marked the beginning of the decline of domestic and British motorcycle brands in the US market, and the rise of Honda and the other Japanese companies.[25][26][27] In December 1965, Edward Turner said the sale of small Japanese motorcycles was good for BSA, by attracting new riders who would graduate to larger machines, not anticipating that the Japanese would advance over the next 5 years to directly threaten British bikes with technically sophisticated models such as the Honda CB750, and the Kawasaki Z1.[28][13] As a case study in business and marketing, the campaign is still remembered half a century later, with one strategic management textbook saying, “Honda and the Supercub is probably the best known and most debated case in business strategy.”[29][30] It was credited with having “invented the concept of lifestyle marketing.”[14]

Specific elements of the Super Cub’s design were integral to the campaign, such as the enclosed chain that kept chain lubricant from being flung on the rider’s clothing, and the leg shield that similarly blocked road debris and hid the engine, and the convenience of the semi-automatic transmission. Presenting the Super Cub as a consumer appliance[11] not requiring mechanical aptitude and an identity change into “a motorcyclist”, or worse, “a biker”, differentiated Honda’s offering, because, “the dedication required to maintain bikes of that era limited ownership to a relatively small demographic, often regarded as young men known for their black leather jackets and snarling demeanors.”[31] 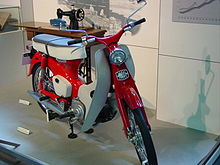 Rather than remaining limited to trying to convince traditional downmarket male buyers to switch to Honda from other brands with the macho approach of most motorcycle advertising at the time, Honda broke new ground. The ad campaign sought to improve the image of motorcycling in general and expand the overall size of the motorcycle market by attracting new riders.[27][31] In a stroke of good fortune for Honda, Brian Wilson and Mike Love composed the 1964 song “Little Honda“, extolling the joys of riding the Honda 50, and even inviting the listener to visit their local Honda dealership, in language that sounded as if it could have been written, or at least paid for, by Honda’s advertising copywriters, yet it was not a commercial jingle.[14] The song was released by The Hondells in 1964, followed by the release of the original recording by The Beach Boys.[14] In 1965 The Hondells released “You Meet the Nicest People on a Honda”, another song promoting the Super Cub, which was actually used in Honda’s TV spots, as a B side to their version of “Sea Cruise.”[32] 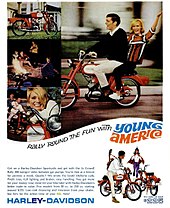 An example of the Harley-Davidson “Young America” campaign

The long-running campaign, including the slogan, the music, and the upbeat images of respectable, middle and upper-class people, particularly women, riding Hondas became closely associated with the Honda brand ever since.[33][25] The image Honda created was contrasted with the one percenter “bad boy” biker and became a focal point of Japan bashing boosterism of US-made Harley-Davidson motorcycles.[26][34]

Aside from Harley-Davidson fans, the company itself had a more conflicted reaction to the successful Honda “You meet the nicest people” campaign. At first, they were offended at the suggestion that Harley-Davidson riders were not “nice people.” Harley-Davidson had, since its founding in 1903, scrupulously cultivated an image of staid respectability, and would not begin to tentatively embrace the “outlaw” demographic of their customer base for at least another ten years. In 1964 they denied any association with one-percenter bikers, and so distanced themselves from the implications of Honda’s campaign. But they also “tried to have it both ways”, and soon joined Vespa and Yamaha in producing ads that were “suspiciously similar” to “You meet the nicest people.”[29][35] Whether they were being offended by or imitating Honda, at the time Harley-Davidson did not share the interpretation that Honda’s advertisements, “added to the macho Harley image.”[36]